The Doubs department offers many exceptional sites and monuments, such as the citadel of Besançon, the royal saltworks of Arc-et-Senans, the castle of Joux, the village of Lods or the castle of Montbéliard.

The Doubs is a very “green” department, with the natural reserve of the Remoray Lake, the Consolation valley, the Doubs jump or the ladders of Death. The Haut-Doubs has the Mont d’Or, and you will find very nice landscapes near the source of the Loue.
You can also organize your ceremony on the shore of a lake or on the banks of a river, like in the region of the Valley of the two lakes (lake of Saint-Point, and lake of Remoray) and their numerous beaches (like the beach of the Perrières and the beach of the Landes in Malbuisson).
To define the environment and the atmosphere of your wedding, the landscapes are very varied: plains, plateaus, deep valleys, rivers, waterfalls, lakes and wooded mountains!

Beyond the ceremony itself, your wedding in the Doubs is also a great opportunity to taste and appreciate local gastronomic specialties such as comté cheese and Morteau and Montbéliard sausages!

We've found 1 listing for you
Featured 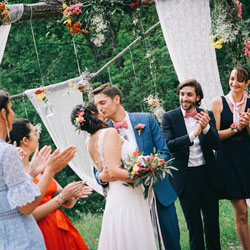 This site uses cookies to provide a relevant experience by remembering your preferences. By clicking "Accept All," you consent to the use of all cookies. You can also customize your permissions.
ParamétrerTout accepter
Gérer le consentement

This website uses cookies to improve your experience while you navigate through the website. Out of these, the cookies that are categorized as necessary are stored on your browser as they are essential for the working of basic functionalities of the website. We also use third-party cookies that help us analyze and understand how you use this website. These cookies will be stored in your browser only with your consent. You also have the option to opt-out of these cookies. But opting out of some of these cookies may affect your browsing experience.
SAVE & ACCEPT
Powered by